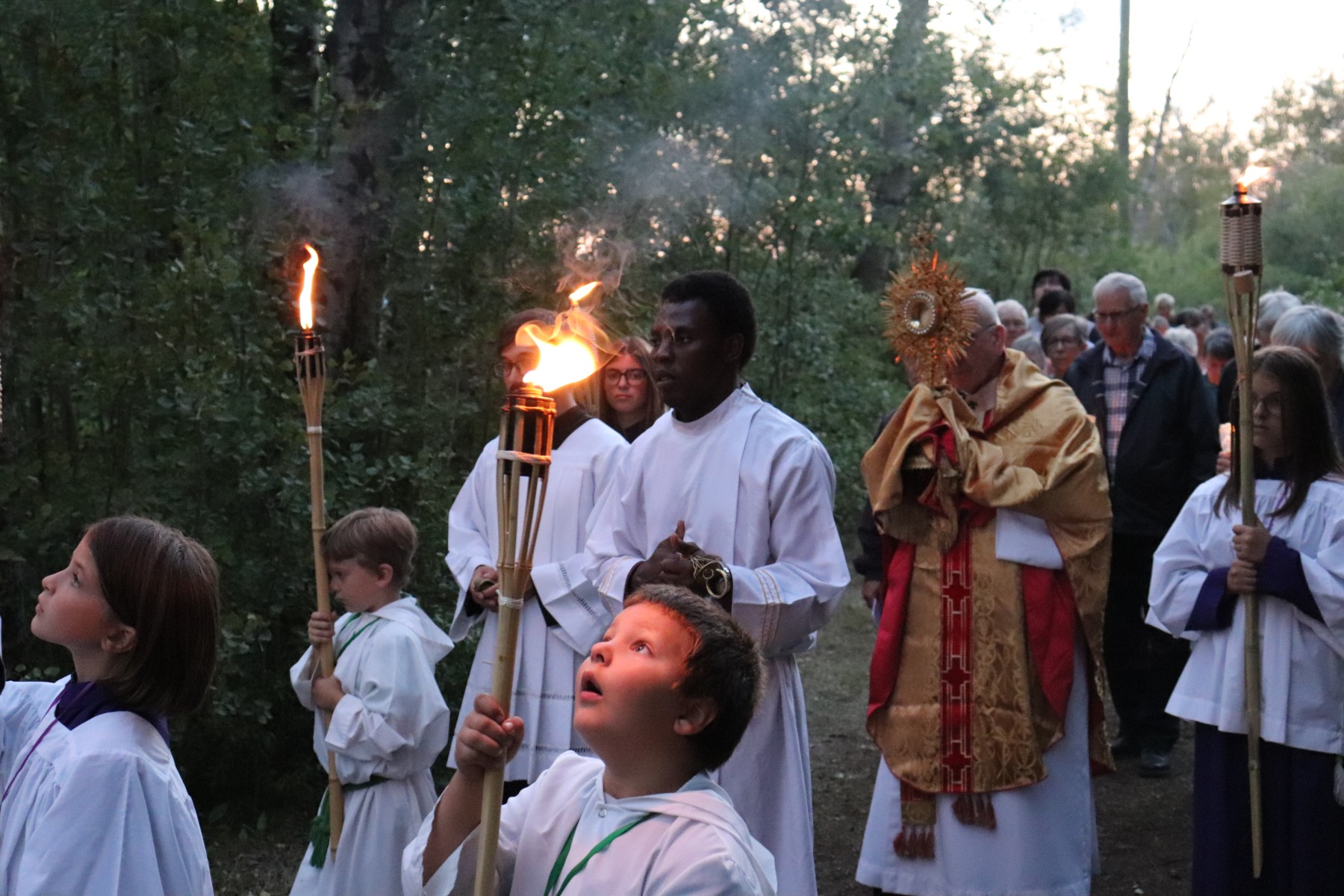 With new dynamics as an archdiocesan event, locals hope to see a strong future for historic pilgrimage

As the people processed through the woods behind the Our Lady of Lourdes shrine and grotto, the reflection of the candles slowly panned across the gravestone of Father Clement Desrochers – the priest who dedicated much of his spirit and energy to growing this very pilgrimage.

For many long-time attendees, honouring the legacy of Father Desrochers is a vital part of the annual pilgrimage in Girouxville, held on August 15th, the feast of the Our Lady’s Assumption. The dynamic, energetic and devoted priest was a true mover and shaker of the area, and the pilgrimage is just one example of the permanent legacy he has left behind.

In his efforts to expand the pilgrimage, it was Father Desrochers who initiated the creation of the Our Lady of Lourdes shrine. He travelled throughout Europe to gather relics, the statues of the Blessed Mother and St. Bernadette, and a church bell that came directly from Lourdes, France.

“The heyday for this pilgrimage, for this local area, was with Father Desrochers. He’s that one that, you might say, ‘made it happen’,” said Maurice Blanchette, who was born and raised in Girouxville. “It began before him, but he’s the one who really made an event out of it. He went overseas and got relics. The idea for the shrine – that was his baby. And he did it all with little money, and it turned out so wonderfully. He made something quite big for this area, and a lot of this pilgrimage is honouring his legacy as well.

“Some of the local people have already canonized him in their hearts. We look back and see how he was a saint, how the Holy Spirit was with him in all he did.”

For Blanchette, the candles and crowds of the night vigil and procession always stand out as the highlight of the pilgrimage. Having attended since he was a child, Blanchette says it is an event of great significance, not only for his family, but for the whole community.

“This is an agricultural parish, so weather and crops are the main determiner of what happens in this place,” he said. “Typically the pilgrimage always comes shortly before harvest begins, so it was a pivotal point in community life. It always signified that harvest was just around the corner. The pilgrimage was our last kick at summer vacation before the harvest began and we entered a new chapter.”

The pilgrimage in Girouxville has a long history stretching back to the early 1940s. The first pilgrimage was held in 1941, just among the parish priests, parishioners and Sisters of the Holy Cross, and the following year it became a regional pilgrimage with many religious and faithful from surrounding communities. Father Desrochers erected the first grotto in 1942.

The event has remained a staple for the area ever since. Many grainy black and white photos have been collected over the years, showing the grotto grounds filled with families, priests and Holy Cross nuns in habits. Within Desrochers’s memoire, several miracles are recorded as having occurred at past pilgrimages, including Jean Lapierre, a lumberjack who had been left physically disabled by an accident, who was healed before everyone’s eyes during the pilgrimage’s healing service.

“I have beautiful memories of going to the pilgrimage,” said Helen Couillard, who has spent her life in Girouxville and today helps run the Girouxville Museum – another staple of the area created by Father Desrochers.

“My great grandfather lived in a house that was right across from the grotto, and we would go every year – my mom, my dad and the rest of us kids. There were people everywhere; hundreds of people came to the pilgrimage back then. For this community – it meant a sense of prayer and comfort. It helped everybody,” said Couillard.

But, like many rural communities in Alberta and across Canada, Girouxville has dealt with a dwindling population over the past few decades. Beginning in the 1960s, Blanchette says, Girouxville slowly began to lose its population as the dynamics of society changed. The young people moved on to bigger cities like Grande Prairie, Peace River and Edmonton. Religion also began to lose its influence in people’s day-to-day life.

“There was a lot going on here at one time,” Couillard recalled.  “I grew up in Girouxville. I went to school right up to grade 12 at the convent here. We had the train. We had stores. But slowly everything went down. The roads came, and with that the school buses came, and soon we didn’t need the convent or school anymore. Slowly things went down, stores closed, and as the years went by there was less and less coming to the pilgrimage. And like a lot of little towns in this area, there was less and less people in general.”

Watch the video recap of our 2021 Archdiocesan Pilgrimage in Girouxville here.