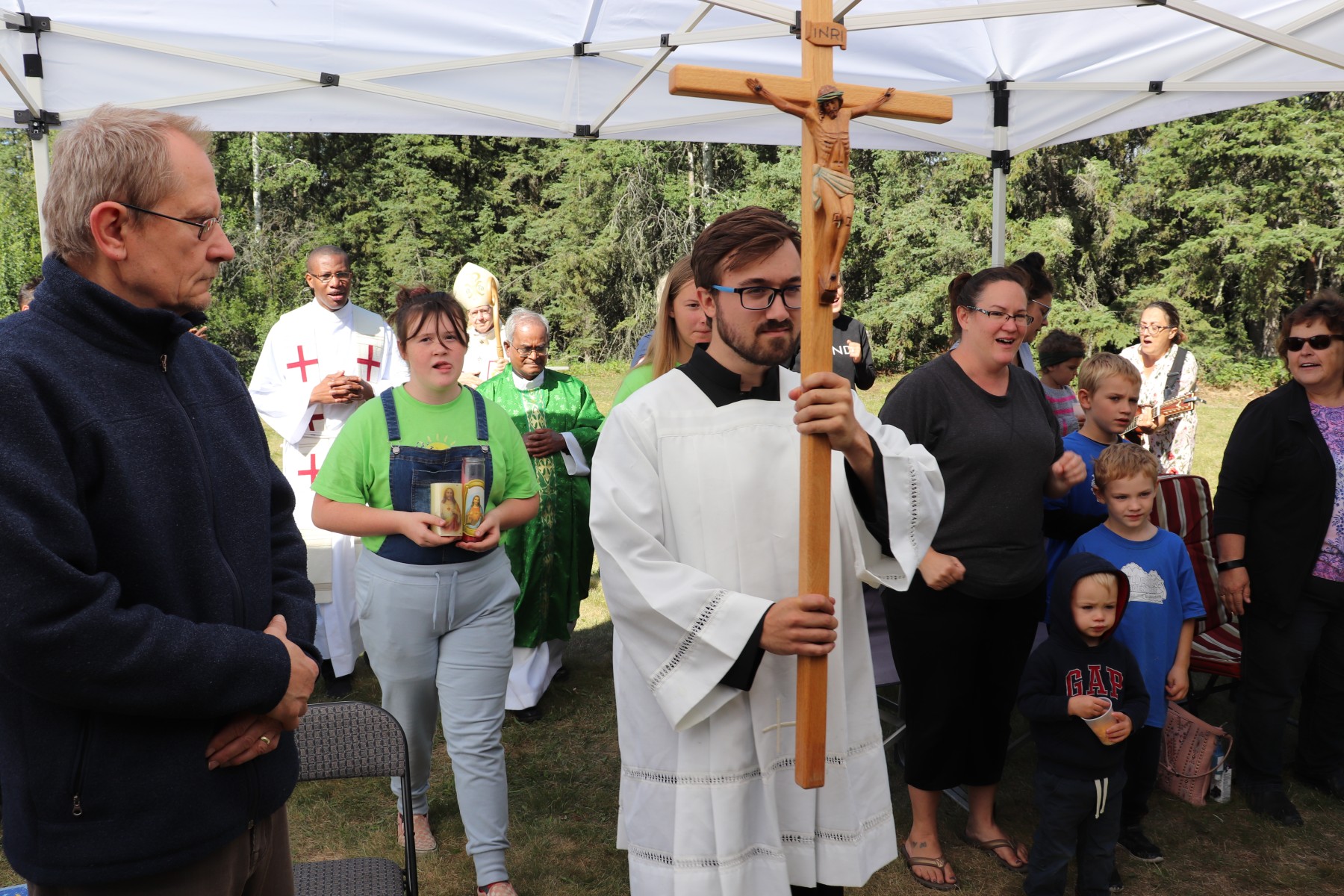 Jamie Schoorlemmer looks over the grounds of Moonshine Lake Provincial Park, where some children are trekking through the woods, some are reciting the actions to faith-themed songs, others are making “Holy Spirit” campfires with cheese, pretzels and other food.

It’s a welcoming sight for the Rycroft parishioner, who played a leading role in bringing Vacation Bible School to the area this summer.

For the parents and more than 30 young people who attended, the experience was also a welcomed return.

“People are so anxious to be together and have fellowship with each other, and the kids are missing each other too,” said Schoorlemmer. “We decided if restrictions lifted this summer we would make sure this camp became a reality.”

For the past 17 years, Vacation Bible School has been a parent-led initiative offering a few days of fun, faith formation, and community to Catholic families in the archdiocese, and especially their young children. The program, filled with different faith-based crafts, music, and activities, is largely drawn from the Catholic Vacation Bible School program by CatChat.

Organized by the parishes of St. Joseph in Spirit River and St. Peter and Paul in Rycroft, the camp is typically attended by families from the area. Families from Silver Valley, Grande Prairie, Fairview, Dawson’s Creek and elsewhere have also participated.

What inspires Schoorlemmer most is the joy Vacation Bible School brings to young Catholics.

“It’s been a gift,” she said. “Seeing the smiles on their faces and the love of Jesus that is apparent through it all. And in helping others come closer to Christ – if it makes that difference for even one person, then that makes all of the efforts put into this worth it.”

Both Schoorlemmer and Rycroft parent Denise Beaupre have helped organize and volunteer with the camp over its 17 years. It was in 2004, when the Oblates of Mary Immaculate brought a 10-day mission to the area, that the Spirit River and Rycroft parishes were first encouraged to form a youth ministry team.

In 2007, the team decided to create an annual Vacation Bible School for Catholic families in the area and around the archdiocese. In the initial years, the school was held over five half-days at St. Joseph’s Church in Spirit River, but it was eventually moved into a three-day camping excursion at Moonshine Lake.

Sherry Bourke came to the camp this year with seven of her grandchildren, but over the years 10 of her own children have attended Vacation Bible School.

“I like that my children can meet others in their faith, and it builds a stronger sense of community through the parents as well. And it shows the kids that learning our faith can have fun elements too,” said Bourke.

“It’s been nice seeing my children who once participated now come back and lead as captains.”

Jill Yuha brought her four children from their home in Silver Valley, having heard about the camp in Spirit River’s parish bulletin. It’s been a joy not only to see the fun her children had, but also the opportunity it provided her to meet with other Catholic parents, who also want to see their families grow and thrive in the Faith.

“It’s great to talk to other like-minded parents and have conversations that are relatable,” she said. “We all have little kids; we’re all raising them in the Church. As a mom, it’s nice to have other faithful families around.”

Much of the programming focuses on making the faith accessible and tangible to small children, whether by music, arts and crafts, theatre and other demonstrations. This year the school is studying the seven sacraments, and as a way of teaching baptism, each family made a holy water font.

“It’s all intermingled – the faith station is what actually teaches us about our main subjects – whether it be the sacraments, the angels and saints, Mary – but what the little ones often remember most is the crafts they made, the songs they sang,” said Schoorlemmer.

“It’s education for the captains and parents too. It’s a refresher for things they learned in catechism that they can now pass on at a child’s level. And it gives parents the experience to see ways to pass on their faith to their children. Now they have the tools to teach their own kids as well.”

For the teenagers and young adults who volunteer with the school, Beaupre believes they particularly enjoy it as a place where they can fearlessly live out their faith.

“The kids don’t have to be afraid to share that they’re here for faith, whereas at school they may feel pressure to cover that up,” she said. “So to see their smiles, you can tell they just feel free here to be themselves. They can live the part of their life they have to cover up among peers and the world at large.”

“It makes my heart happy to see these young teens, who are out in that secular world where it’s not easy in this day and age, and they’re free to express their faith here. It gives them the courage to go beyond this campsite and move that faith out into the world.”

As parents who have devoted many years of time and effort to make this Vacation Bible School a reality each summer, both Schoorlemmer and Beaupre hope the Vacation Bible School will continue on into the next generation – as a staple event of fostering faith among Catholic families in the area.

“We heard one of the captain’s say ‘One day I’m going to run this camp,” said Beaupre. “Hearing that is so encouraging – that we’re raising little leaders.”