A pilgrimage of healing 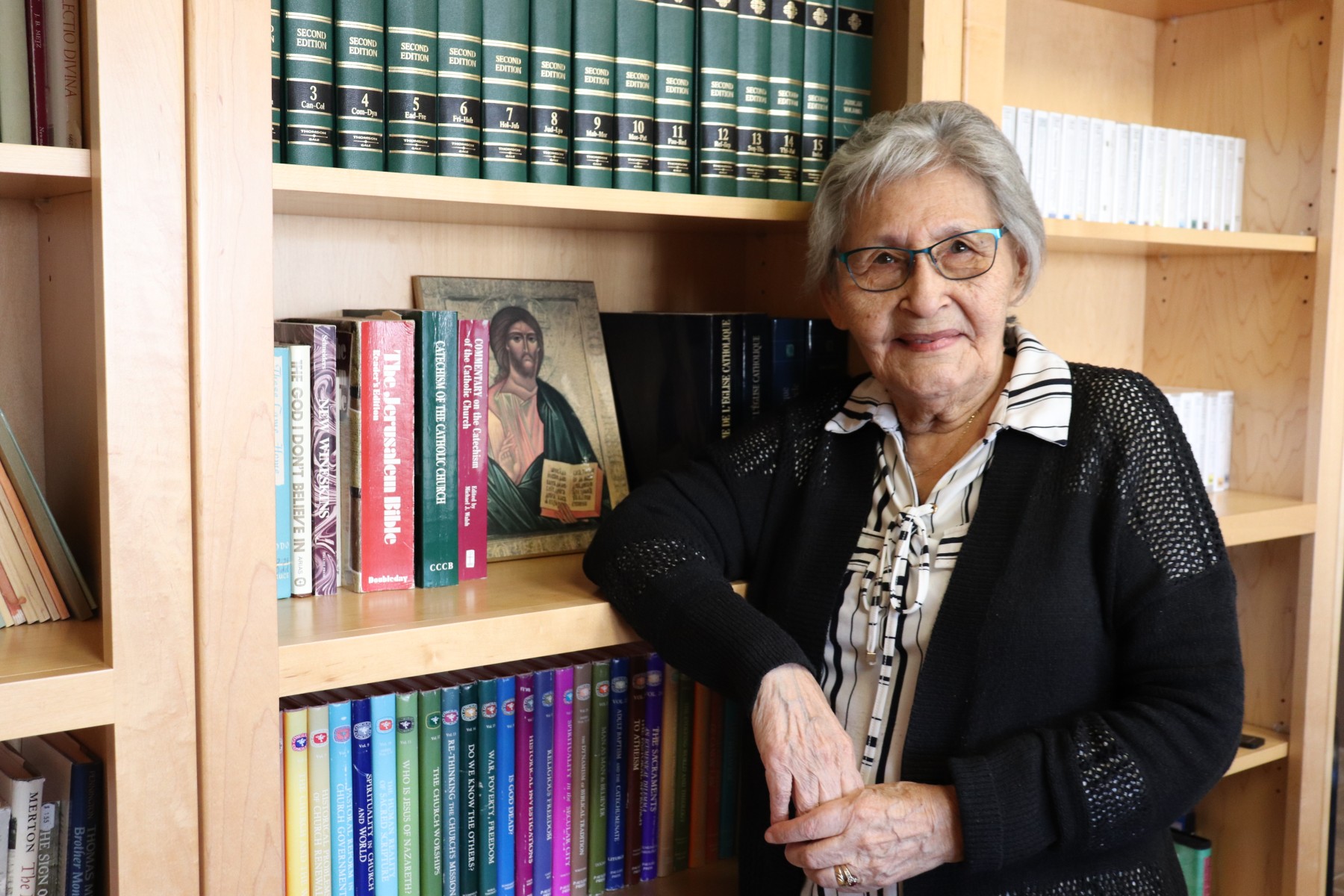 A pilgrimage of healing

As she prepares for the Indigenous delegation to Rome, Angie Crerar hopes to find forgiveness and reconciliation for her people

Angie Crerar has lived a life inspiring the hearts of many. Through the years, she has been a part of various coalitions, councils and efforts advocating for Indigenous peoples and encouraging truth and reconciliation across the country.

This December, Crerar is making another milestone on this lifelong pilgrimage of hers, as she travels to Rome with the Indigenous delegation of Elders, youth, knowledge keepers and Indian Residential School survivors to meet with Pope Francis.

For the Grande Prairie resident, this delegation of Indigenous peoples to Rome is both an important mission for truth and reconciliation, and an important moment in her own personal journey of healing and finding peace. Both of these have been lifelong and essential missions in the life of the Metis Elder and Indian Residential Schools survivor. Crerar knows her time in Rome will be far from a mere political gesture, it is fundamentally a spiritual mission – for herself, for the Indigenous people, and for the whole nation of Canada.

“We’ve got a job to do,” Crerar said with a deep sigh. “We have an obligation to these kids, not just in my time but over the past one hundred years. They have got to have an identity. Those children need an identity. That’s a birthright.

“I hope the pope will hear us and I hope and pray those children are identified. It just shows that the past is still here today, that we are not just numbers. We have names; we are human beings. Like everybody else we are children of God – that’s what my parents taught us.”

Crerar has lived in Grande Prairie since 1966, moving to the Peace Country from Yellowknife, Northwest Territories. She was raised in a strong Catholic household, though her traumatic and difficult experiences in the Indian Residential School system left her with many mixed feelings towards the Church – feelings she still struggles with today.

“We were taught the Church was universal. My parents taught us to love, to be united as a family, that the family that prays together stays together,” Angie recalled. “And the people who taught that same religion also changed my life forever – so it’s hard for me. But what’s most important is not what happened back then, it’s where we are today.

“To learn to forgive, it’s been a real challenge. But the love of my children, my husband and my friends is what has guided me… I know now it’s time for me to heal. I have to cross that line.”

As she steps into this most pivotal task, Crerar still struggles to come to terms with the reality that she is a part of this important delegation to Rome.

“It is just beyond me, I can’t imagine it – me there, speaking to the pope.”

It was Audrey Poitras, the President of the Metis Nation of Alberta, who first called Angie and asked her to represent the Metis people of Alberta as part of this delegation. It was a moment that brought Angie equal jolts of shock and happiness.

While she immediately said ‘Yes’ due to the excitement of the moment, Crerar said as soon as she hung up the phone she immediately went into a state of disbelief – not only because of the magnitude of things like meeting the pope and going to the Vatican, but the weight of the historic mission she is now playing a central role in.

Alongside the need to give an identity to the unmarked graves recently located near residential schools across Canada, in her many years working with Indigenous councils, Elders, various groups and organizations, and speaking publicly as a residential school survivor, Crerar says that what she has heard Indigenous Elders want most is a sincere apology from the pope.

Sincerity, in Crerar’s eyes, gets to the very heart of truth and reconciliation.

“You’ve got to be sincere. We don’t need false promises. We need sincerity and honesty.”

Crerar’s experiences growing up in the Indian Residential School system were strenuous and hard. The school had a history of outbreaks of illnesses and food shortages. Angie says her and her siblings suffered physical abuse, and Angie can still recall students being referred to as savages and being told that their way of life was a sin.

“I will never forget those words,” Crerar said.

“I’ve been all over Canada, telling about my experiences in residential schools, and I’ve met so many Elders and survivors. Every time we speak about it, we’re back there again. That pain, that loss of feeling, that sense of nowhere to go – it all comes back. It’s like we’re there again.”

The recent locating of unmarked graves has only further brought back difficult memories and feelings for Angie.

“It troubles me so much sometimes I can’t breathe,” she said. “Some came out with no place to go, so many new challenges. I knew three students who committed suicide, one of them was only a week after leaving the school. We were not prepared for the outside world.

“I still live with it and I will always live with it. Although I forgave myself and forgave everyone else, when the news comes – I still flash back.”

Through all of these immense challenges and experiences, there was however one kind-hearted priest Angie still remembers fondly. A parish priest near the Fort Resolution residential school who did much to help Crerar and her sisters after their mother died.

“That priest is somebody I keep close to my heart,” she said. “Because with everything we went through he was always so kind to us. That was when some of us understood the different between cruelty and kindness, because he was good. He belonged to God. And yet, others acted so differently, and we questioned that quite a bit.”

After she left the Northwest Territories in the late 1960s, for many years Crerar did not share her experiences in residential schools. In 1979, she met a Metis Elder who introduced her to the Friendship Centre in Grande Prairie, an organization that offers a variety of programs and initiatives to help Indigenous peoples living in urban areas. Crerar has remained a member ever since, and it was there she slowly found the encouragement to open up and share her story.

As she met more and more people she felt she could trust, much of the burdens of the past Crerar had kept inside she began to talk about openly.

By the 1990s she became involved with a variety of programs in the Grande Prairie area and began speaking at schools about her experiences in the residential school system. Today Crerar is president of the Metis Local 1990 in Grande Prairie and an Elder with the Metis Caring Centre. She even shared her story as a guest speaker at the Truth and Reconciliation Commission’s national event in Edmonton in 2015.

“The room was packed with people and when Angie spoke, you could hear a pin drop – it was so quiet,” recalled Marge Mueller, the northwest regional manager of the Indigenous Courtwork Program and a close friend of Angie’s. “Her story was very, very impactful. And she has been instrumental in guiding and helping others in their healing journey.”

All of these moments represent important intermediate steps on Crerar’s lifelong pilgrimage seeking forgiveness and healing. Another milestone in this journey has come in the past two years, since she has sparked a close friendship with Fr. Remi Hebert, pastor of St. Joseph’s Church in Grande Prairie. Though it is often wrought with difficult emotions, Angie hopes to rekindle herself with the Catholic faith.

“It’s been a long, long journey, and I felt it was time,” Crerar said of her recent decision to try to reconcile her relationship with the Church. “I felt empty. I felt I was missing something. When I started my healing journey, I didn’t even think about the Church. All I was thinking about was getting rid of that big lump, the barriers I put in my life, so that I could take back control of my own life. It’s taken me many years, and it’s something I will be working towards for the rest of my life.

“Just in the last two years I’ve been working with Fr. Remi to try and come back, to follow what my parents taught me,” Crerar explained. “Both my parents and my grandparents were very, very strong Catholics. After my years in the convent and residential school, I came out of it very angry. But with the help of many, many people, I got over that anger. I learned to respect myself and to forgive – first myself and others.

“I know it has to come from here – the heart – it has to be sincere. I have to do this not just for my parents but for me, for my own peace of mind.”

In many ways, Angie says Fr. Remi reminds her much of the kind parish priest she knew as a girl. Through continuing meetings for tea, conversation and prayer, the two have developed a strong friendship. Fr. Remi also helped organize a series of Walking on Sacred Ground Together events at St. Joseph’s Parish and invited Angie to speak there. This has further strengthened their efforts at truth and reconciliation.

Fr. Remi says Angie has helped teach him an important lesson for a priest in Canada today – that the heart of any efforts with truth and reconciliation is in forming relationships.

“Getting to know each other gives me great hope, and it shows that so much of this is about relationships. It’s about friendship,” said Hebert. “We know each other well enough I know I can call her any time. It’s warmed my heart a great deal. She spoke as part of an event here in Grande Prairie for Orange Shirt Day, and during her talk I was sitting there thinking, ‘Yes, that’s the person I honour.’”

Another important companion in Angie’s life has been Marge Mueller. They have worked alongside each other for more than 42 years, advocating and working together to create a better future for Indigenous peoples in Grande Prairie and the Peace Country area.

Mueller says among the people in the community who know Angie, there is confidence that the delegation is in good hands thanks to her involvement.

“When I heard the news I was excited,” Muller recalled. “I feel strongly they couldn’t have a picked a better person for this delegation, to represent not only the Metis people but all people.

“Angie has done a lot of work in this community, and it’s always been to empower the Indigenous people, to know that they’re worth something. Our communities were so broken. There was much alcoholism, destruction and self-destruction. We want to advocate for a better way for our people, towards healing and harmony in our community. Angie’s made a tremendous difference already in this community, in Alberta and nationally.”

No matter what unfolds in the coming days in Rome and in Pope Francis’s future visit to Canada, Angie is sure it will be another key moment in her life and in fulfilling her purpose in this world.

“If I can just find peace it will be my journey’s end. It’s time, and I will do it,” she said. “There’s still unfinished business I’ve got to seek. And I have to do it and embrace it with everything I’ve got.”