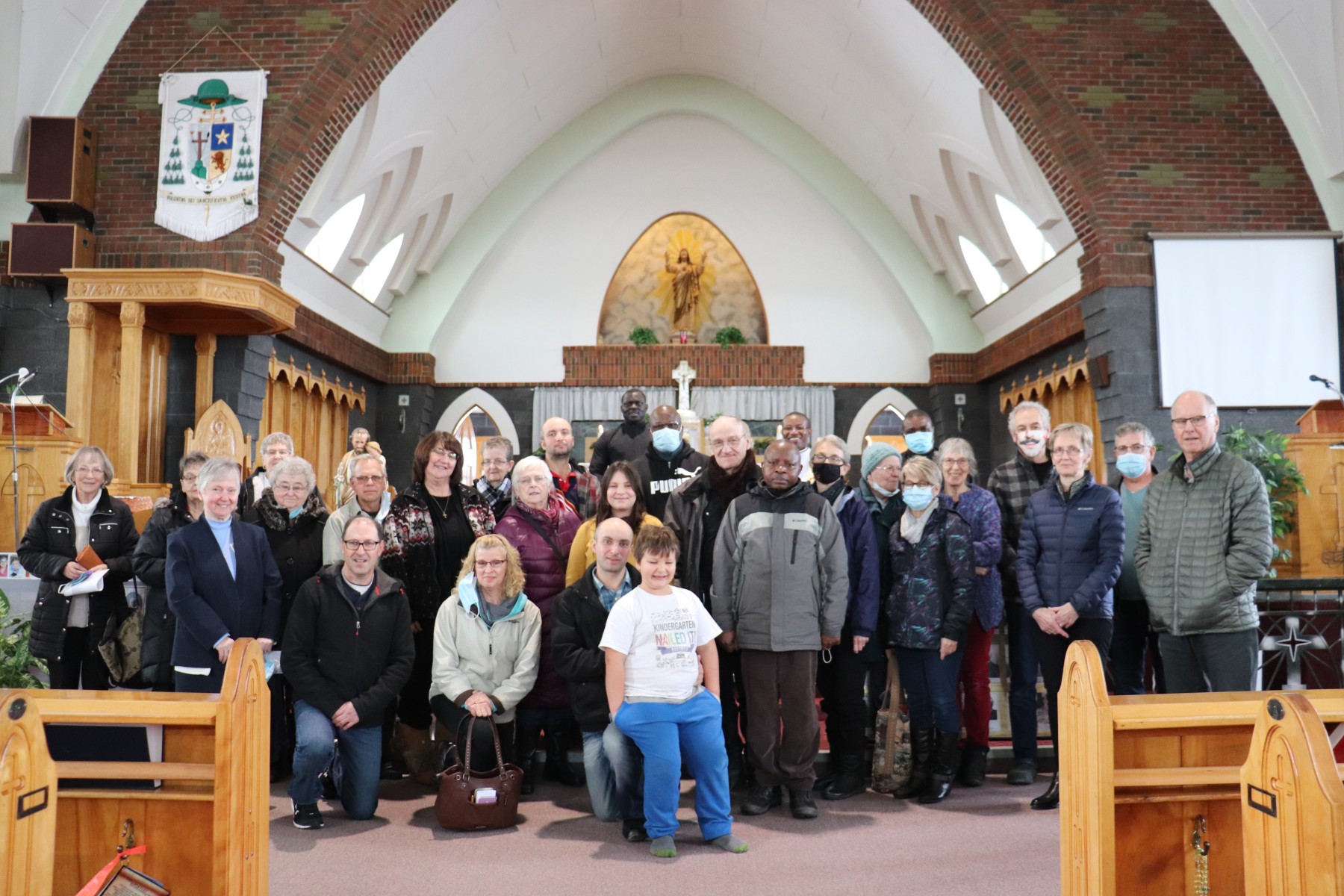 On the morning of Nov. 20, the heavy overnight snowfall did not stop faithful from across McLennan, Falher, Girouxville, Tangent, Guy and St. Isidore from gathering at the St. John the Baptist Cathedral.

Thirty-two Catholics were there for the final event of the Pastoral Ministry Month – four weeks of conferences and retreats to encourage a sense of community, dialogue and inspiration for those who work in various ministries in our churches.

This closing retreat showed that, in an archdiocese that covers such a broad region and where winter weather can often be a major obstacle, the people still came together to share and be connected. And this, says Fr. Emmanuel Ekanem, was precisely the mission of these ministry retreats.

“We decided to create a ‘Pastoral Ministry Month’ to bring people together – to talk about what we do, to reflect, to pray together and to build each other up,” said Fr. Ekanem, who is director of the Office of Evangelization and Catechesis for the archdiocese.

“We need to reignite the spirit of ministry in these very challenging times we are in now. The biggest part of this program is being in touch with people in ministry and to see how we can support, strengthen and encourage them.”

Pastoral Ministry Month is the first initiative of its kind in recent years for the Archdiocese of Grouard-McLennan. Beginning in mid-October, a retreat was held with each of the five deaneries in our archdiocese, as well as retreats with the Holy Family and Grande Prairie Catholic school boards. A Diocesan Ministry Conference with guest speakers Bishop Stephen Hero of the Diocese of Prince Albert, Saskatchewan and Sister Angela Marie Castellani, FSE of the Archdiocese of Vancouver was also held. The Deanery 1 retreat brought 32 people, 40 people attended the Deanery 2 retreat, 46 attended the Deanery 3 and 4 retreat, and 26 attended the Deanery 5 retreat. The conference, hosted via Zoom, was attended by more than 100 people across the archdiocese.

Just being able to bring people of the archdiocese together was the highlight for Fr. Emmanuel.

“We want people to know they are not alone in what they are going through,” he said. “Having our speakers like Fr. Leo [English], Sister Connie [Harkin], the Archbishop, Msgr. Charles [Lavoie] and myself, and hearing so many stories of ministry and how ministry has impacted them – it was all very beautiful and very enlightening.”

This sense of unity and inspiration was felt amongst attendees. Monica Bisley has helped McLennan’s parish priest, Father Eucharius Ndzefemiti, SDV, for several years with his ministry at Manoir du Lac – the long-term care home in McLennan. Twice a week she helps him prepare Mass for the residents.

“I find it is uniting – each of us gathered here with a common interest, a common vital interest,” Bisley said of the Nov. 20th retreat and the Nov. 15th conference she attended. “I found what Sister Angela [Marie Castellani] had to say very relevant – that we have to look at the Church in a different way. We’ve been doing the same thing for so long, but this situation has shaken us up to branch out, to reach out and be more inclusive.

“Given the isolation of the past two years, this has been very beneficial.”

This is only an excerpt. The full story will be in the December edition of Northern Light