Walking together towards reconciliation 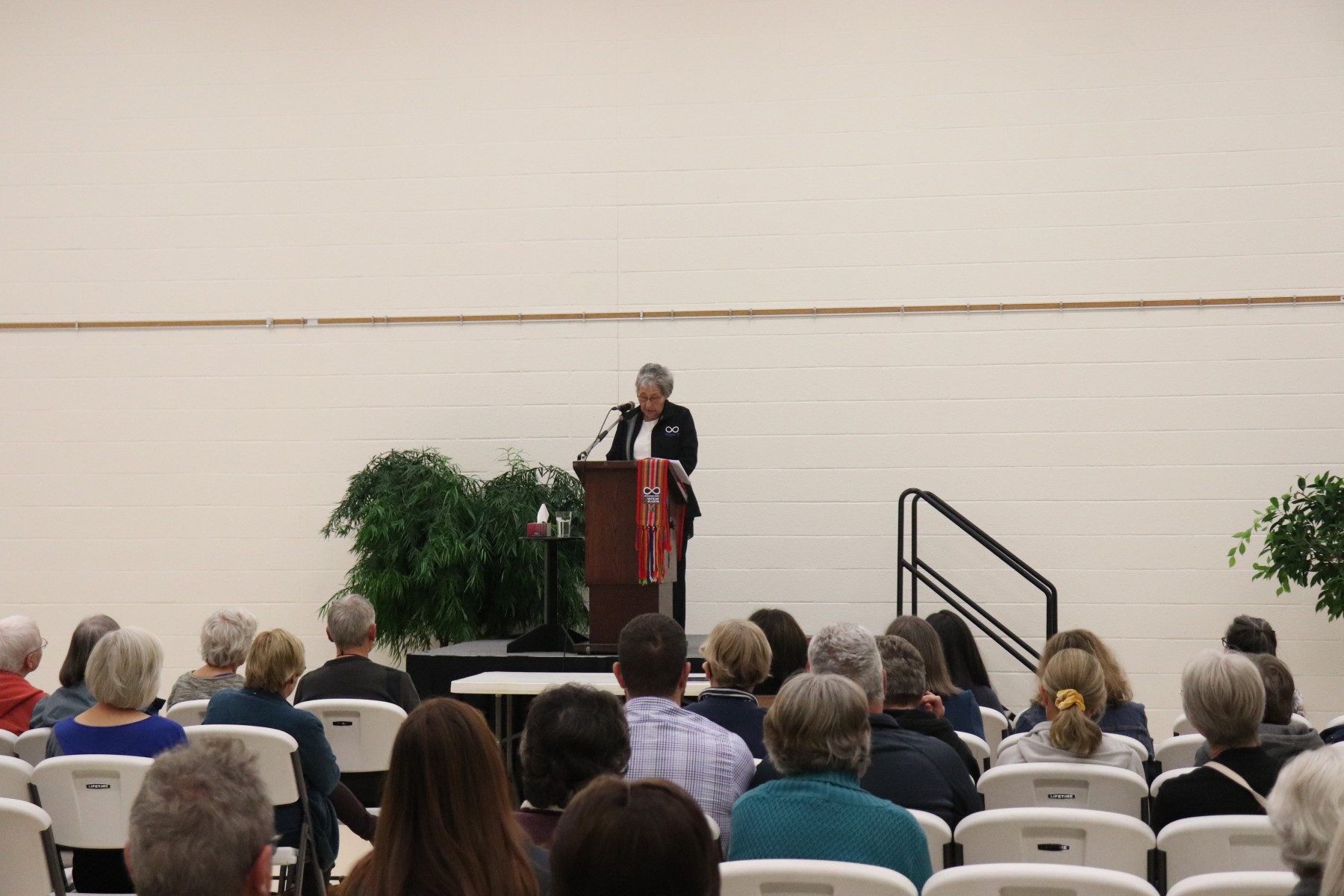 Walking together towards reconciliation

Angie Crerar can still recall being a young girl in the Northwest Territories, staring at a peculiar picture her father had placed on the living room wall.

Often other kids in the neighbourhood would visit her home and ask her – “who is that old man in the picture?” Angie says she could never give them an answer, until, when she was five, she decided to ask her dad about this mysterious figure.

“My dad said, ‘That’s the pope’,” Crerar told the people gathered at St. Joseph Catholic Church in Grande Prairie to hear her speak. “He said, ‘That’s the most powerful man in the world, because he’s the man who can whisper into God’s ear.’ I always remember that.”

This childhood anecdote would prove to be defining in the life of Angie Crerar, who has not only seen and met the current pope on several occasions, she has also become a “local hero” in her role with healing and reconciliation efforts between the Indigenous peoples of Canada and the Catholic Church.

On Oct. 5, persons from across the archdiocese attended “Walking Together Towards Reconciliation”, to hear Angie Crerar and Archbishop Pettipas converse about this important talk of our times.

As she stepped up to the podium to speak, Angie discussed her childhood, the impacts of the residential school system on her and her siblings, and her experiences as part of the Indigenous delegation to Rome and with Pope Francis’ recent pilgrimage to Canada. She especially reflected on the impact Pope Francis’ words left on many elders and residential school survivors.

Crerar was born into a strong Catholic family, attended a residential school in the Northwest Territories and is today a long-time member of the Metis Local 1990 in Grande Prairie.

When she was first asked to be part of the delegation of residential school survivors, elders and knowledge keepers to meet with Pope Francis in Rome last spring, Angie says it was a moment of great joy.

“When I got that phone call, I cried,” she said. “Who was I – a little Metis girl from the Northwest Territories – to come up and see the pope? I felt so humbled. And I felt so proud.”

In a sense, Angie Crerar’s life has been one lifelong pilgrimage of seeking healing, forgiveness and peace. And when she finally got to Rome, these things were stirred in her to a level she had never felt before.

“When I went to Rome – I could never ever fully express how I feel about it – but I felt a peace that I had never felt before,” she said. “I want to say so much about the pope. He wasn’t just another person. Sometimes you get that feeling that somebody is watching you, and after I did my speech I got this feeling that someone was looking right at me, and I looked up and saw right down the aisle was the pope, looking directly at me. And his face – his face was full of tears. And my heart was about to stop.

“I could sense that he really heard us. And I finally felt free. To see somebody who you were told as a child could whisper to God, and then to see him in person. Everything fell right into my heart. I’m 86 years old, so it took me this long, but finally I felt free.”

Angie spent much of her talk reading passages spoken by Pope Francis that had profoundly impacted her. She particularly focused on his apology at Maskwacis, as well as his remarks during the final day of the Indigenous delegation to Rome, when Pope Francis first gave his apology on behalf of the Catholic Church to the First Nations, Metis and Inuit people of Canada.

It was a poignant moment for the audience gathered at St. Joseph Church, to hear these words of Pope Francis now reiterated again by a residential school survivor who was so deeply affected by them. When Pope Francis acknowledged at Maskwacis that even his talking about the Indian Residential School system may make many Indigenous people deeply uncomfortable, Angie says this was a moment that stood out to the survivors gathered there.

“When he said that, every one of us there, all the First Nations, Metis and Inuit, we all turned around and looked at each other,” said Angie. “Because nobody had ever said this. No one had stopped to think of the fact that all these survivors, all their suffering, whenever the news comes out we feel it all again. These are those feelings that we can never let go of. You can forgive but you can never forget. So when the pope spoke about that, we saw that he remembered every word we had said to him.”

This is only an excerpt. Read the full story in the October 2022 edition of Northern Light