No longer a doubting Thomas 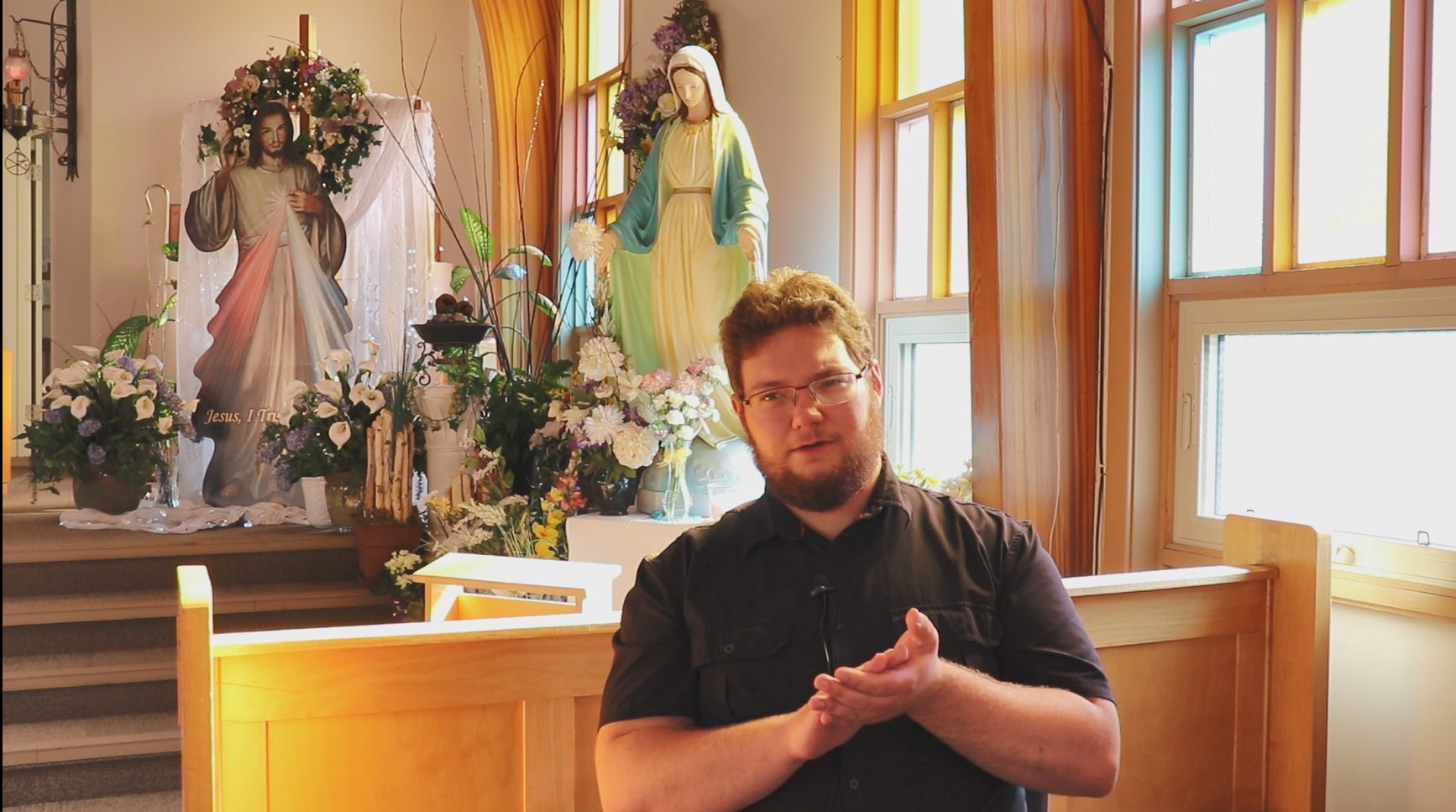 No longer a doubting Thomas

As he enters his sixth year of formation, Thomas Wollis reflects on his vocational journey

In the months leading up to his high school graduation, Thomas Wollis was riddled with indecision.

He had attended a Come and See weekend at St. Joseph Seminary in Edmonton, and though it was a time of great peace, the 18-year-old was unsure if embarking on the path to priesthood was really where he should take his life. For many weeks and months afterwards he battled with what future he should pursue.

Then a brief remark during a homily at his home parish – Our Lady of Peace in Peace River – struck his heart. Thomas knew he had to take his indecision to prayer, in hopes of getting a definitive answer once and for all.

“I was sitting at church one Saturday evening for Mass, and Father had made a comment during the homily. It was just an off-hand comment, but I felt like he was speaking right to me. He said, ‘And we don’t have any doubting Thomas here,’ and I could feel myself sinking into the pew,” Thomas recalled. “It forced me to think more about it. I remember going home and praying about that – ‘am I being a doubting Thomas?’ So I prayed and asked the Lord to just give me a sign.”

As he finished this prayer, asking God to give him a sign of where he should take his life after high school, Thomas hoped the clouds would part, the earth would shake and a big booming voice of thunder would shout down from the heavens – telling him either to go to seminary or go elsewhere. That didn’t happen. But what did happen right after that prayer was still rather peculiar and seemingly miraculous.

“I finished my prayer and I went out to watch TV,” Thomas continued. “I got a phone call not even 5 minutes later from someone who I had once worked with. Somehow, I’m still not sure, he had heard about me discerning going to seminary. And without word of a lie, the first words out of his mouth, not even a ‘hello’ or anything, the first words out of his mouth were: ‘You’re going to seminary.’

“And I just thought, ‘Okay. It doesn’t get any clearer than that.’ There’s no way this was a coincidence, as I had just finished praying that God would send me a definite sign only five minutes earlier. So after that phone call I looked at my mom and dad said, ‘Well… I guess I’m going to seminary.’”

That June, Thomas was accepted and entered his first year of seminary for the Archdiocese of Grouard-McLennan. Reflecting on that phone call now, as he prepares to enter his sixth year of seminary formation, Thomas says it shows that the Lord was at work even in the midst of him being a stubborn teenager.

Raised in a Catholic family, Thomas was born in Ontario and his family moved to Peace River in 2010. He was strongly drawn to the Church from a young age, especially in the sense of community and support it always instilled in him.

“Everyone coming together as a single family, that support of kinship, it proved to be something very important to me, something essential,” Thomas said of the Church. “Numerous times it was the sense of community that grounded me in my faith, that enriched me in the faith.”

In particular, at a time when one of Thomas’ younger siblings was ill and in hospital, he recalls the great support the parishioners of Peace River gave him and his family. He can still remember being 10 years old, and sitting at a pew in the church one afternoon, anxious and worried as his sibling was heading into surgery.

“I was feeling a bit alone, isolated, angry. And a woman at church came and put her arm around me and said, ‘It’s all going to be okay.’ And there was just an overwhelming sense of peace. All the anger, all this fear just washed away. To this day I can still remember that feeling of peace. It felt like no matter what happened thing were going to be okay.

“That experience of fellowship and community has really led me to where I am,” Thomas continued. “It forced me to look beyond myself, to see myself as in community with others, and to do for others what they have done for me. I think that has in part led me to where I am today, discerning a call to the priesthood, entering seminary and, God willing, in the future being a priest for the archdiocese.”

That discernment to the priesthood has come with its own joys and struggles. The biggest challenge in Thomas’s first years of seminary was maintaining the will to be engaged with his studies – a key part of seminary formation that can often bring with it great challenges.

Whether it was classes on the ancient Greek philosophers or the history of art and architecture, Thomas says his saving grace was being able to keep that greater goal of his vocation in mind in the midst of the intensity and heavy workload of his classes.

“It can be a challenge when study seems like its just study for its own sake,” he said. “I had to remind myself that I’m here not because I love doing studies, it’s because there’s something greater I’m working towards. That’s why I appreciate the breaks – where I can take a step back and come home, and I can just breathe and remember why I’m doing what I’m doing.”

A particular moment of peace and affirmation in Thomas’s call to the priesthood came when he and other seminarians spent a month long “immersion” experience in Telegraph Creek in northern B.C.

The seminarians were asked to simply live as witnesses in the community – living alongside the Tahltan First Nations people there. They assisted with a number of parish activities, including Liturgy of the Word, catechesis for the youth, RCIA in Dease Lake, and general parish maintenance. They also hosted youth gatherings and attended various community events.

“Once again there was just this sense of peace while I was there. There wasn’t a lot of extra distractions. It was just living with the community, and trying to be a light in the community and bear witness to the truth of the Gospel,” Wollis recalled. “Coming back from that experience we did an 8-day silent Ignatian retreat. And after that I felt, ‘Okay. I can do this.’”

Much like the things that fostered his love for the Church, what Thomas loves most about seminary is the sense of community it creates. With every seminarian he has met, Thomas says there’s a sense of brotherhood, knowing that he could call them up if he ever needed someone to talk to. Thomas has maintained close friendships with many priests ordained across western Canada, and also with those who eventually discerned out of seminary and got married. Whether its to celebrate an ordination or to celebrate a wedding, that fellowship experienced at seminary is reignited when the men come back together to celebrate the success of one of their own.

When Thomas first entered the seminary, there were four other seminarians for the archdiocese at that time – some who were ordained and some who discerned out. Now into his sixth year, Thomas believes the main issue that keeps young men today from an openness to priesthood or to entering the seminary is the amount of emphasis society today puts on self-image and material success.

To take the chance in entering seminary, Thomas says, no matter if one eventually discerns out or is eventually ordained, means to live according to what God wants for your life first and foremost. That can be a great challenge in our culture today, but Wollis’ advice ultimately boils down to taking that leap of faith and trusting that God has a plan for your life.

“It’s always tough when you see people leave, you hear people are discerning out, you see past abuses in the Church come to light – it can all shake you. I would say you just have to stay the course, trust in the Lord, and you’ll get to where you need to go,” Thomas said.

“The McCarrick abuse scandal broke when I was in seminary, and I remember Archbishop Smith [of Edmonton] gave a talk to the seminarians and he spoke of discernment. He said that men today are discerning their vocation in a way like the image of a firefighter running into a burning building to save persons.

“We are preparing ourselves to run into the crisis of the Church to save souls. And what good is it for a firefighter to run into a burning building if he’s scared of fire. That kind of fear can be a great temptation sometimes, so when things seem like they’re in a mess or they’re falling apart, we have to just stay the course and trust the process. If we can say, ‘Jesus, I trust in you’, over and over again – we’ll get to where we’re going.”

In the years since he received that phone call, when that former co-worker called up out of the blue and said ‘You’re going to seminary’, Thomas’s sense of his own calling to the priesthood has only grown stronger. As well, with each passing year of seminary formation, his understanding of his vocation has taken on new depths.

“My discernment has evolved,” Thomas said. “I remember going in first and thinking, ‘Lord, I’m going to seminary because you want me to be a priest.’ And then it became more and more that I also want to be a priest; I want to do this for myself. And then with time you begin to realize it’s not solely because I want to and God wants me to. The main reason is that I want to serve God’s people. I’m pursuing my vocation not just for myself but for the flock of God’s people and for the whole of His Church. It’s all about how can I serve God’s people and serve God’s Church.”

This article is the first in a three-part series about young men, either from or living in our archdiocese, discerning a call to the priesthood. A companion video series to these articles will also appear later this year.