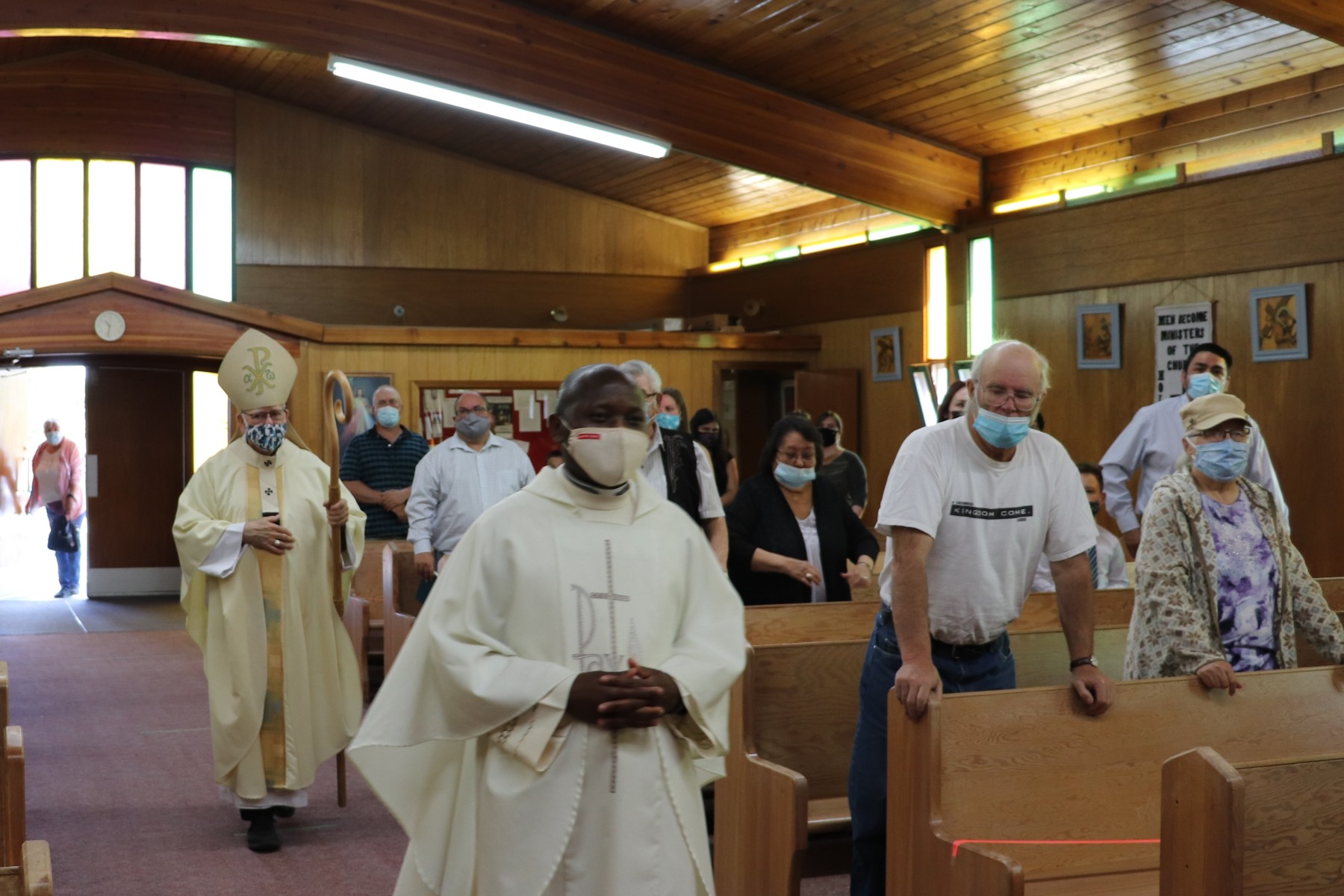 With his parish now repaired from major flood damage, Kenyan priest reflects on his tumultuous first months in Canada

As Fr. Charles Mungai, FMH, looks over the newly renovated and restored parish hall at St. Henri’s Church, the vivid and chaotic memories of the priest’s initial months in Canada run through his mind.

The Franciscan Missionary of Hope arrived in Fort Vermillion from the Diocese of Nairobi, Kenya on January 29, 2020. He was about to begin a new chapter as the parish priest in Alberta’s oldest settlement. But little did he know, a world-shattering pandemic and a once-in-a-century flood were also on the horizon.

Coming to Canada in the midst of -50 degree weather, Mungai was sure his biggest challenge would be surviving these bitter cold temperatures. Then, just one month into his time as pastor, the initial COVID-19 lockdowns were ordered across Alberta and the world – closing churches, schools and businesses everywhere.

Mungai was no longer able to publicly celebrate Mass or share the Gospel with the students of St. Mary’s Elementary School. In fact, nearly every aspect of daily life was brought to a halt.

It was not the expected beginning to Father Charles’ ministry in Canada.

If that wasn’t enough, only a few weeks later Mungai received a bright red piece of paper on his doorstep. It was a mandatory evacuation notice for all residents in the low-lying areas of Fort Vermillion. It ordered them to immediately pack what they could and leave their homes, as the Peace River was now projected to flood the entire area.

On Sunday, April 26, the river began to do just that.

The mighty Peace River is only a stone’s throw from the doorsteps of St. Henri’s Church. As large ice jams caused the water levels to rise, the Church’s basement hall, as well as the cemetery and the basement of the neighbouring rectory, were quickly flooded.

“I was in a state of just total confusion,” Mungai recalled. “I just couldn’t understand these events playing out. As soon as I thought that I was about to settle down – something else came up.

“It’s an experience I will never forget in my life time.”

Mungai stayed at a variety of places as he waited for the flood to recede, including the rectory in High Prairie and Archbishop Pettipas’ home in Grande Prairie.

When Mungai finally returned to Fort Vermillion on May 12 to assess the damage, he discovered more than $400,000 in damage to the church and rectory. As well, chunks of ice and driftwood floated into the town’s Catholic cemetery, nearly flooding and covering the entire area. The church still had electricity, but its water lines and plumping all had to be replaced.

St. Mary’s Elementary School, situated not far from the school, was also heavily damaged by the flood, and was subsequently demolished.

“By the time we came back the water had receded, but you could see the signs that the water had just wrecked total havoc,” Mungai said. “The whole basement was full of water, nearly to the roof. Books, sacramental items, chairs, furniture, the kitchen appliances, everything was ruined.”

By the beginning of July 2020, Mungai returned to Fort Vermillion to stay. Shortly after, St. Henri’s celebrated its first public Mass since the flooding. The bathrooms and waterlines remained out of use, but parishioners were eager to return to the church.

Nearly 30 people showed up to that first public Mass, with COVID-19 restrictions still in place.

“Those who were around were very hungry for the Mass,” said Mungai. “Although Fort Vermillion was still very much deserted at that time. Many had gone to High Level and elsewhere due to flood damage.”

Restoration work on the rectory and church began that July. Entirely new flooring, tiling, insulation, drywall and panelling were installed at both the rectory and parish hall. Many new appliances, toilets and other essentials were brought in. Heating and electrical units were all replaced.

As of this summer, the parish hall has never looked cleaner and more up-to-date – a far cry from when it was full of nothing but river water and floating chairs, textbooks and silt.

Now that the parish hall and rectory have been repaired, restored and recovered, some sense of normalcy has returned to Mungai’s life. Like all of us, he is still reeling with the pandemic and its restrictions, and the hall still needs new chairs, tables and other items.

“After all of the chaos of the flood and the pandemic, now there’s hope. There’s calmness. It is good,” he said.

Mungai has kept some written notes from this experience, so that one day he can write his memoir and detail this most tumultuous of adventures – his first three months in Canada, and the global pandemic and the cataclysmic flood that greeted him upon arrival.

“One day I look forward to retelling this story of what happened to me when I came to Canada. When I was posted in St. Henri’s in Fort Vermilion and all these crazy events that came with it.

“Hopefully I will age gracefully so I can tell the story.”