‘Finally the homeless have a home’ 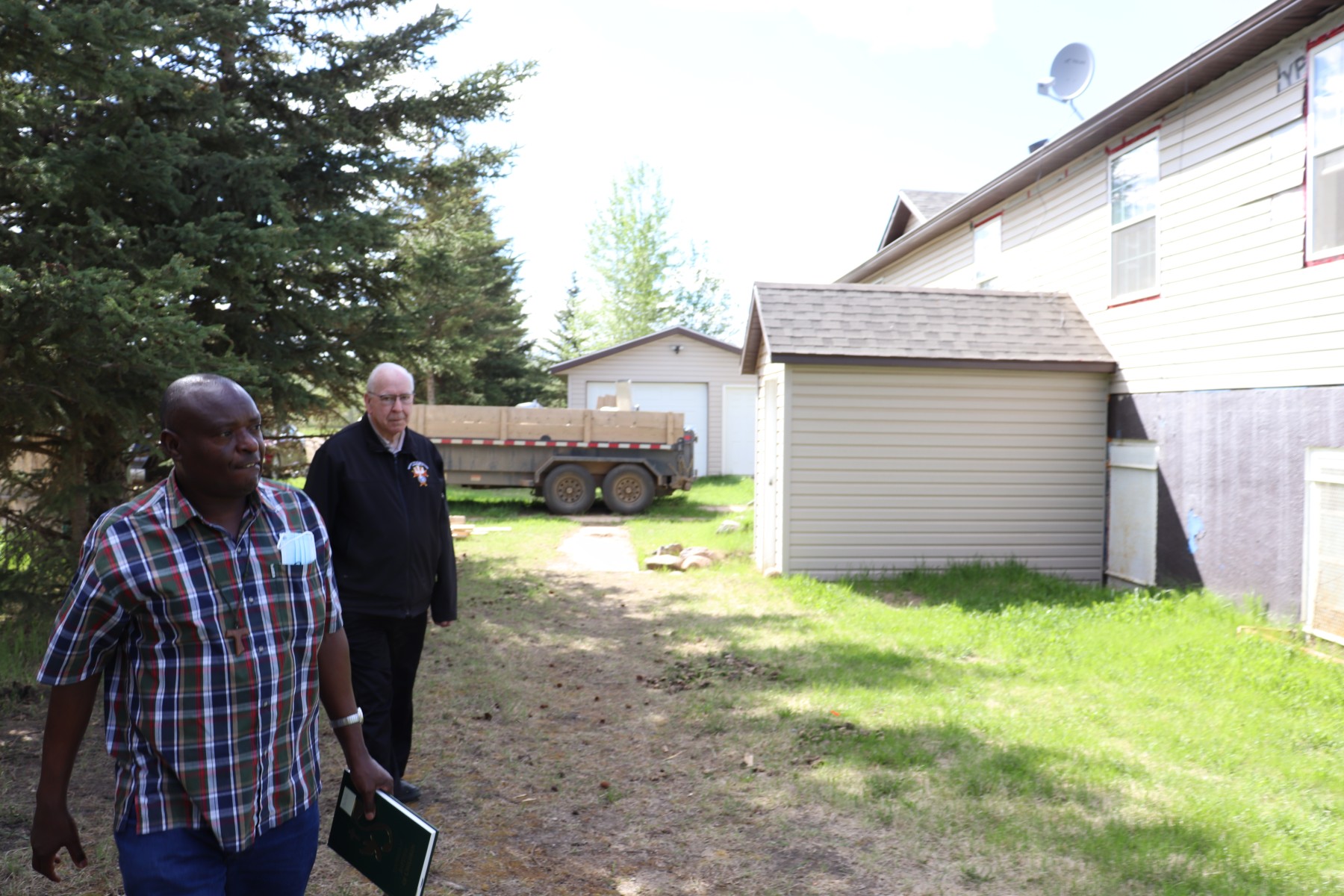 ‘Finally the homeless have a home’

After many months of restoration work, missionary priest is able to settle into his parish and rectory

When Fr. John Basiimwa arrived at his new parish home in the northern Dene reserve of Chateh, there was one major problem – he had no rectory to live in.

The rectory attached to Chateh’s Our Lady of Assumption Church was still standing tall, but inside it was getting to a dilapidated state. Heavy winds had torn off some of the shingles on its roof. Parts of the ceiling were tearing apart and dripping with water. The kitchen floor was sinking in and mould was beginning to form throughout the building.

“It was in shambles,” Father Basiimwa recalled. “The ceiling of the rectory had protruded. I was scared it might fall on me. The place was very wet and boards were beginning to rot. It seemed like it was crumbling.

“I found a corner to sleep in for my first week, but it was really a kind of scary experience. But I thought to myself, ‘this is what missionary life is all about’.”

It was in September of 2020 that Basiimwa first arrived in Canada, joining the work of his fellow Franciscan Missionaries of Hope in deanery five, which represents the most northernly parishes and missions of our archdiocese. Basiimwa is a founding member of this Kenyan order of priests, who serve the parishes and surrounding missions of High Level, Fort Vermillion, Little Red River Cree Nation and Chateh.

Father John still recalls his first time driving to his churches in Chateh and Rainbow Lake, when the rough and rugged dirt roads to the reserves were freshly covered in snow. It was the first time the Kenyan priest had ever driven on snow.

“It was really very tough for me. I had to go no more than 20-40 kilometres an hour. I thought maybe the car might fly off the road,” he reminisced, now able to laugh about the experience.

The main culprit for the rectory’s rough state was a lack of insulation near some of the church windows. This had created a build-up of condensation in the attic that was beginning to deteriorate parts of the building.

When the archdiocese went to investigate the state of the building, it was a community elder in Chateh that had first pointed out that this build-up of condensation was likely due to a lack of insulation.

Thankfully the renovation work, done by the company Weather Proof-IT, began shortly after Basiimwa arrived in Chateh. The renovators first did some repairs to the outside of the rectory as well as to a sewage line, and then moved inside the structure itself.

When the renovators came in the late fall of 2020, Basiimwa initially planned to stay with Fr. Henry Kiggundi in High Level, but plans soon changed.

“When I was in Rainbow Lake I shared my story, and two parishioners, Maureen and Trevor, said that there was an apartment available in Rainbow Lake, and if I wanted to stay it wouldn’t be a problem,” Father John recalled. “It started out being just for a month, and then I ended up staying there almost a year. They were very kind and considerate. The people were really good to me and I appreciate all that they did for me. They made me feel at home in Rainbow Lake when I was really stranded and didn’t know what to do.”

Some members of the community even joined him for his daily Masses. Father John says whenever he celebrated Mass in Rainbow Lake, he always had a community to pray with him, even if only 2 or 3 people.

This is only an excerpt. The full story will be in the November 2021 edition of Northern Light