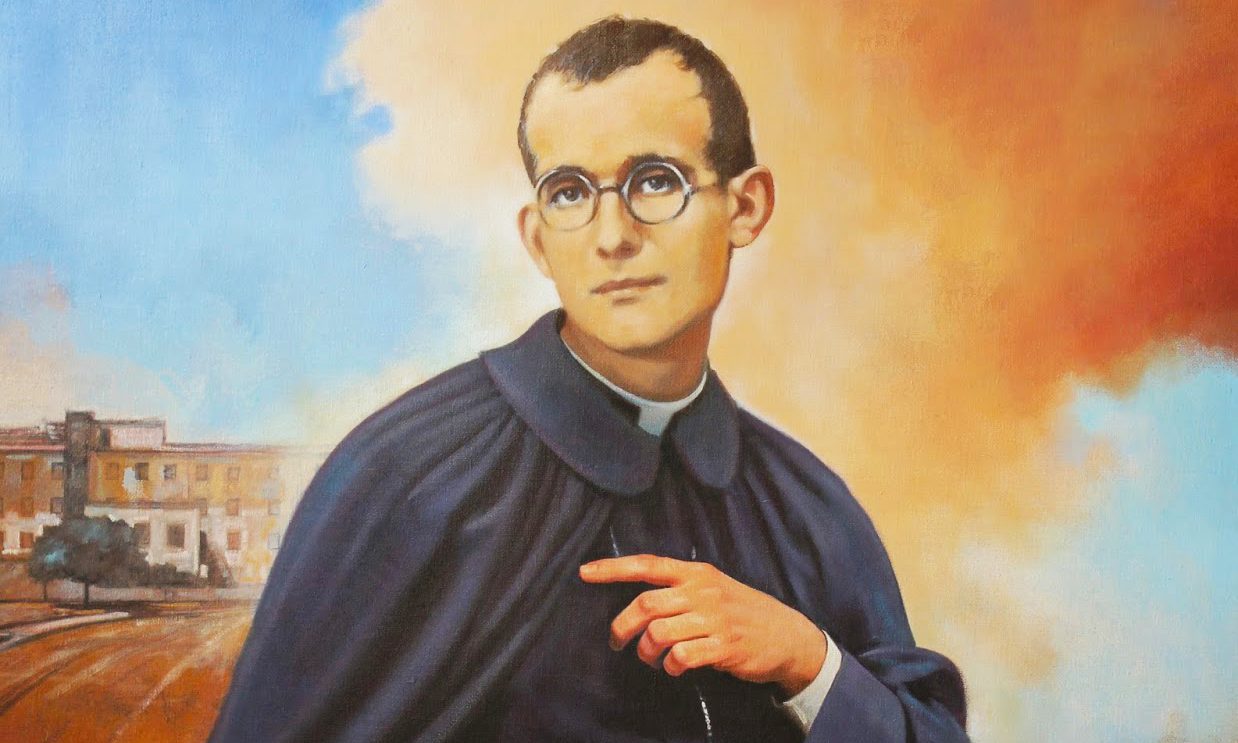 When Father Bernard Akum entered the Society of Divine Vocations in 2007, he and his fellow seminarians would pray daily that their order’s founder, Giustino Maria Russolillo, would soon be a recognized venerable of the Church.

A few years later in 2011, while Akum was deep into his studies and preparing for priesthood, news came that Fr. Russolillo would be made a blessed. The order then prepared a new prayer – for their founder’s canonization.

And earlier this year, that prayer too was granted. Russolillo was canonized a saint by Pope Francis on May 15, 2022.

“At each point along the way we have been praying for him,” said Fr. Akum, who today is the pastor of St. Bernard’s Church in Grouard. “So I just look back and say, ‘Lord, you do hear prayers.’ Eleven years I’ve been doing these prayers and now he is canonized. And looking at what he passed through, his frail and humble nature, how his order grew – I just feel in his life it was all providentially leading to this.”

Fr. Bernard had hoped to be in Rome for the actual canonization of St. Giustino. But he is happy that it happened while he was on mission, serving the largely Indigenous congregations of Grouard, Peavine, Gift Lake and Atikameg, and doing his part to fulfill the vision the saint had set out for his order of priests. Several other priests in our archdiocese are also members of the Society of Divine Vocations, including Fr. Christian Ogbonna, pastor in Girouxville, and Fr. Eucharius Ndzefemiti, pastor in McLennan.

Even before he was publicly declared a saint, Guistino’s intercession is something Father Bernard has constantly felt at work in his life. One particular prayer written by the saint has been a constant guide and source of hope for the priest throughout his ministry.

“There is a prayer for perseverance he composed, and I think from the day I entered the congregation until now that prayer has been working for me,” he said. “And that is a miracle. Because it is not easy to go be a priest in another country. There are issues of language, of ideology, of food, issues even in the way you look. So it becomes a great challenge. But that prayer for perseverance, it has really strengthened me, and I keep praying it. I persevere because I continually strive to be docile to the Holy Spirit.”

Giustino Russolillo was born in Naples, Italy in 1891. From a young age, Giustino felt a calling to priesthood. But it was an ambition that was met with immediate obstacles, due to his poor health and correspondingly pale complexion.

“He was frail, had poor health, and was diagnosed with asthma, which he struggled with until his death,” said Akum. “His father had died by the time he began to discern the priesthood, so his family struggled to pay for his seminary formation. Because of how sick he always looked, his mother was often told it would be better for him to become a shoemaker; he did not have the physique to be a priest.”

But his mother persisted in trying to raise the necessary funds for his formation. After petitioning the local bishop, her son was able to enter the seminary.

As he approached his ordination, because of all of the difficulties he faced financially and due to his health, Russolillo made a vow to one day found a congregation where a person could become a priest without these obstacles getting in the way.

In 1913 Russolillo was ordained a priest, and by 1914 had already started organizing with a group of young people to begin building his order. It took another six years before his bishop finally granted his heart’s desire, and in 1921, the future saint founded the Society of Divine Vocations.

“It started growing from there, though there were many challenges,” Akum said. “But once you have your mission and you trust in the Lord, with patience you will always succeed.”

For his seminarians, Russolillo put great emphasis on the importance of catechism, especially in giving knowledge of the faith to young people and to discern who amongst them may have a calling to religious life. Because of this, many of the early members of his order were young people he offered free catechism classes to. He quickly earned a reputation for having the gift of discernment, and thanks to this gift he was greatly favoured by bishops and the superiors of religious orders.

“The congregation became very important in the Church, because their charism was to go out and help people find their vocations – to religious life, to married life and so on,” said Akum. “St. Giustino could even discern whether someone was called to the diocesan priesthood or to an order of monks, like the Augustinians or Benedictines.

“He was a sick priest in body, but very healthy in spirit, humility and obedience.”

What Fr Bernard finds most inspiring in the saint’s life is above all his humility. A powerful testimony to this humility happened in 1945, when Fr. Russolillo was stripped of his authorities as the father general of his own order, and a Franciscan was appointed in his place.

“And Guistino would go into this Franciscan’s room and clean it. He would do his work as if he was a student. He did not care that someone else had taken over his congregation,” Akum explained. “For two years he was stripped of this; they were so hard on him.

Though he was so humble, he was also very strict. Once he saw that a student had a bad character, he would expel them. And many of the students he expelled later became politicians who fought against the congregation. So because of this the congregation had a lot of accusations.”

Fr. Bernard had never heard of Fr. Russolillo or his order of priests until he visited their novitiate in Nigeria in the early 2000s. At the time he was discerning a call to life as a religious priest, and made visits to several different orders. He completed a year of formation with the Sons of Mary Congregation before finally realizing he was called to be a ‘Vocationist’, the moniker given to priests of Russolillo’s order.

“I was with the Sons of Mary as an apostolate, but I found God was calling me elsewhere. That year I did learn a lot; it gave me the foundation of religious life,” Akum recalled. “When I visited the Vocationists, the very name attracted me. It sparked my curiosity. And when the vocations director gave me a history of their charism, spirituality and apostolate, I could sense that this is where God was calling me to be.

“So I said, ‘If God gives me an opportunity to be a priest in the Vocationist congregation, I will try my best.’”

Over his formation that calling was further solidified, and today Akum deeply identifies with the Vocationist charism. Central to St. Russolillo’s faith was his trust in Divine Providence, and this trust is something Father Bernard has tried to shape his life by as well. He attributes his coming to our archdiocese, his stationing as pastor of Grouard, and even getting his driver’s license – all to the work of Divine Providence.

This is only an excerpt. Read the full story in the July-August 2022 edition of Northern Light