Water to the fire 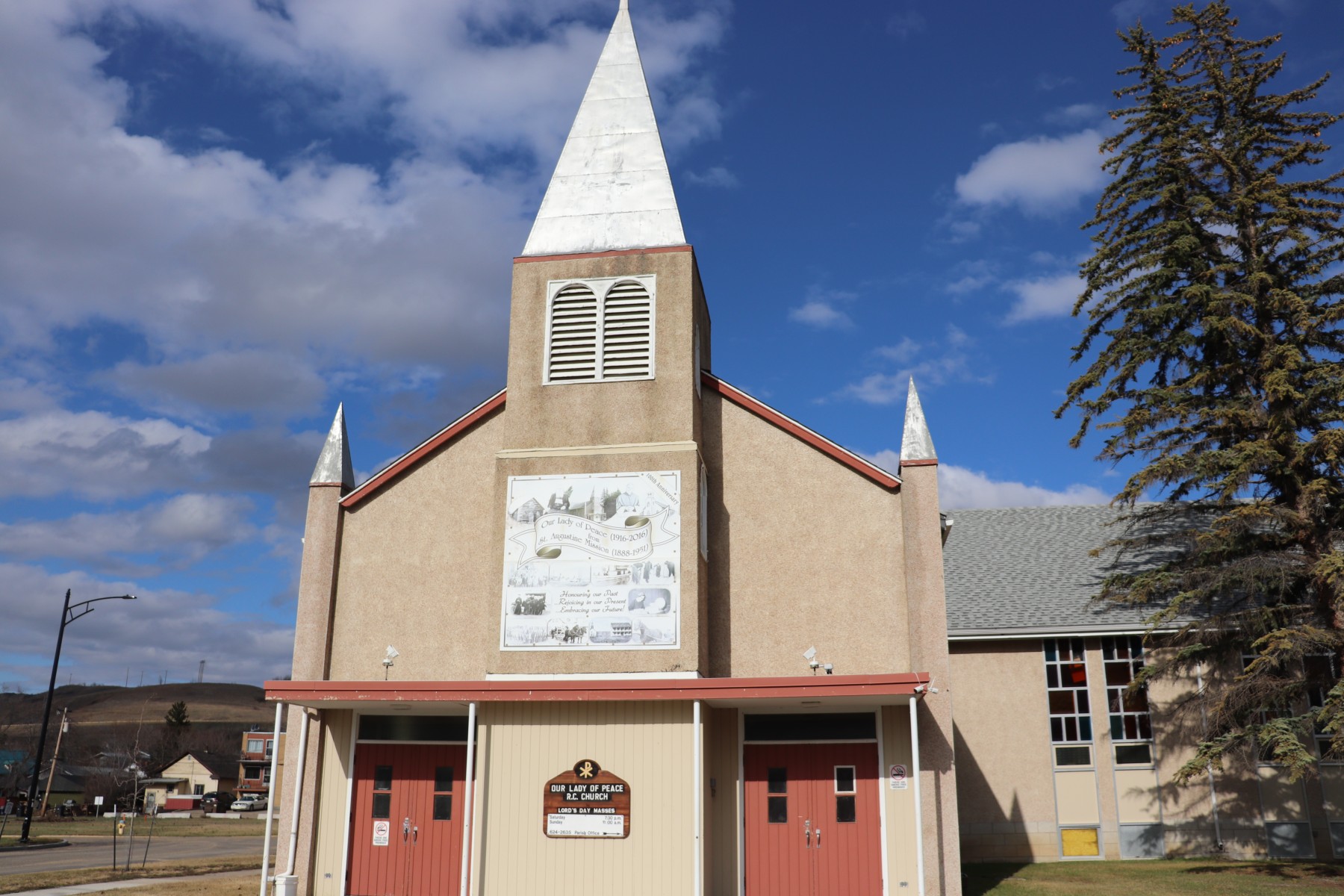 Water to the fire

Fr. Nel Esguerra had to put his years of firefighter training to the test to protect his parish from an arson attempt last week. But, he believes the miraculous intervention of God is the real reason his church is still standing.

It was around 11 p.m. on Saturday, July 3rd, that Archbishop Gerard Pettipas and Fr. Nel awoke to the blaring ring of the Our Lady of Peace Church’s fire alarm. The archbishop happened to be spending the night in Peace River, as he had plans to install Fr. Chukwudi Jieme as the new pastor in Grimshaw the next morning.

As the alarm rang through the rectory, both the archbishop and Fr. Nel looked around the building to see any signs of a fire. Because there had been a funeral at the parish that morning, Fr. Nel initially expected that incense had been left burning in the sacristy and this had triggered the alarm.

But as soon as the priest opened the door leading from the rectory to the sacristy, large clouds of black smoke began billowing out of it.

The priest rushed forward to find out where this long trail of smoke was coming from. He peeked through the door that leads into the parish hall, and there he saw two flames near the main entrance. One flame was just starting to develop, but the other flame was already taller than him, and swiftly growing.

Instantly, Esguerra put his nearly ten years of volunteer firefighting experience to work. He rushed back to the kitchen to fill a pail of water and then got a garden hose. As he rushed around to begin extinguishing the two flames, he noticed that the window to the main entrance had been smashed in. Not only that, a third flame was also rising from the church basement.

When Fr. Nel finally made his way downstairs to put out that third flame, he found at the bottom of the steps what appeared to be a bottle filled with gasoline and a burning rag at its end. This type of homemade bomb is commonly referred to as a “Molotov cocktail”.

Fr. Nel was able to extinguish the flame in time, preventing the bottle from exploding.

“My theory is the bottle was thrown in, hard enough that it smashed through the window and landed first on the carpet, and then it eventually rolled down the stairs causing the flame in the basement,” said Esguerra.

“If it had landed directly into the basement I think it would have exploded on the spot. If it did, it would not have taken long for that fire to spread and do a lot of very serious damage to this church. It is a miracle that that Molotov cocktail never exploded. I consider it an act of God.”

Thanks to Fr. Nel’s courageous efforts, the damage to the church was limited. A section of carpet and walls are burned and damaged, and the smell of smoke still lingers in the church. But the parish was spared the damage seen in many other churches across Canada recently. In the last week of June, six churches were burned down in British Columbia, and others were damaged by fires in the Northwest Territories and Nova Scotia. Each fire is being treated as suspicious.

In Alberta, the historic St. Jean Baptiste Church in Morinville was engulfed in flames and burned down on June 30. As the fire began to uncontrollably consume its walls and interiors, the 100-year old church with its towering bell tower crumbled to the ground.

As Fr. Nel valiantly put himself through billowing black smoke to extinguish the flames engulfing his parish, thoughts of the church in Morinville, and the ashes and rubble it was reduced to, were running through his mind.

“The one thing in my mind at that moment was Morinville. That church was a symbol of faith, a symbol of the community, and for that building to no longer be standing there is very demoralizing,” said Esguerra. “And as I was putting out the fires, that was the one thing I kept thinking – I’m not going to let this symbol of faith and hope be taken away.”

The fires come in the aftermath of news reports of unmarked graves found near former Indian Residential Schools across Canada, most of which were run by Catholic religious orders. The stories have sparked a tremendous backlash against the Church, including accusations of genocide. However, a full investigation on these graves has yet to be completed.

In 2015, Dr. Scott Hamilton from the Department of Anthropology at Lakehead University in Thunder Bay, Ontario, was asked by the Truth and Reconciliation Commission to complete an in-depth study and report on the deaths of residential school students and of burials on school grounds. His 44-page report states that communicable diseases were a primary cause of death during the 19th and 20th centuries, such as tuberculosis and the Spanish Flu. The often poor, crowded and out-of-the-way conditions of the residential schools would have increased the spread of these diseases and the lack of resources to combat them.

The Department of Indian Affairs that established the Indian Residential School system had no formal or written policy on the burial of children, nor funding for it. With limited resources to send bodies to their home communities and to maintain graveyards at the school, Dr. Hamilton writes that typically cemeteries were established on school grounds and marked with wooden crosses. This was often the only way of burying those who died at the schools, including students, teachers and religious.

Documentation of the existence of these gravesites goes back to 1907, though Hamilton’s report states that by the 1940s deaths at the residential schools had become increasingly rare. While there was often little work done to maintain these cemeteries, and many went into total neglect after the closure of the schools, Hamilton’s report found no direct evidence of a deliberate attempt to hide graves.

Since 2014, the Truth and Reconciliation Commission have called for efforts to identify the number of bodies buried at these gravesites, to restore them, and to work towards other efforts to honour the memory of those deceased there.

In our age of rapid information and social media, this issue has sparked and renewed tensions across Canada, for Indigenous and non-Indigenous people, and for Catholics and non-Catholics alike. When Fr. Nel prepared for his homily on Sunday, July 4, he debated whether he should bring up the suspected arson attack on the church at all.

“I was worried that maybe I’ll say something too political in the heat of the moment,” he said. “But I thought – parishioners need to know what happened. And it’s a teaching moment for me, to walk the talk and be an example of how we should react on such an occasion. So I just prayed to be guided by the Holy Spirit, to respond in a way that was not from a position of hatred or pointing fingers and making accusations, but in a way that stops this cycle of hatred and revenge. Because it needs to stop.”

In his homily, Fr. Nel urged faithful to respond to such attacks on the Church with love, understanding and forgiveness. When we are faced with a damaging fire, we seek to put it out, not to stoke the flames and help it grow.

“We don’t let the church be burnt with anger and revenge, but we heal it with compassion, kindness, forgiveness and reconciliation,” Esguerra said in his homily. “The grace of God is sufficient. Therefore when we are weak, we know that our wounds and Christ’s wounds are united. That those thorns within us and the thorns inflicted on Him are united.

“We always have the choice on how to react to these tragic events. Let us choose to be on the side of the grace of God, and the grace of God will always tell us to forgive, to love and to care. Let us remember there is a chance for us to be reconciled, to be healed. Let us move forward with the grace of God.”

That homily, shared first as a livestreamed Mass on the parish’s Facebook page, has now spread around social media, with many commenting on its power and emotional impact. Global News even contacted Esguerra and asked to use a part of the homily in their news broadcast.

Looking back, Fr. Nel says there is much more to be thankful for than upset about.

“It’s very sad to see the damage to this property, damage which could have cost lives, but people have shown so much support, and they have shown that they value their faith and they value this church,” he said. “People are volunteering to patrol the church, and even people from other communities are calling and asking if they can do anything to help.

“Those gestures made me realize that there’s so much to be grateful for. It could have been so much worse. And we were still able to celebrate Mass the next day.”

After the morning Mass on Sunday, some parishioners came back to the church at 3 p.m. to offer a prayer to St. Joseph. The priest and parishioners then went around the church seven times, blessing it with holy water and salt.

It is certainly a moment that has deeply affected Fr. Nel and the Catholic community of Peace River. While inspecting the church a few days after the fire, the priest found a small fragment of the rag that was used as a wick in the Molotov cocktail. He has kept it as a memento from the experience.

At a time when the world seems overwhelmed by negativity, by the wickedness of humanity, the sins of the Church and the divisions in society, the Peace River pastor hopes people will seek ways to heal pain, and not to inflict it further.

“There’s still a long way to go. It will be a long haul, but that’s the life of the Church. There’s up and downs, and this is one of those down moments,” said Fr. Nel. “We will always be imperfect people, and there will always be people in the Church who do imperfect things. But in moments like this we must learn above all to follow the golden rule. And that rule comes with a twist. It means not only to do unto others what we would like them to do to us. It also means when someone does something bad to you, you respond by doing the opposite.

“We must always be the people who put water on the fire, not those who want to see it burn further.”