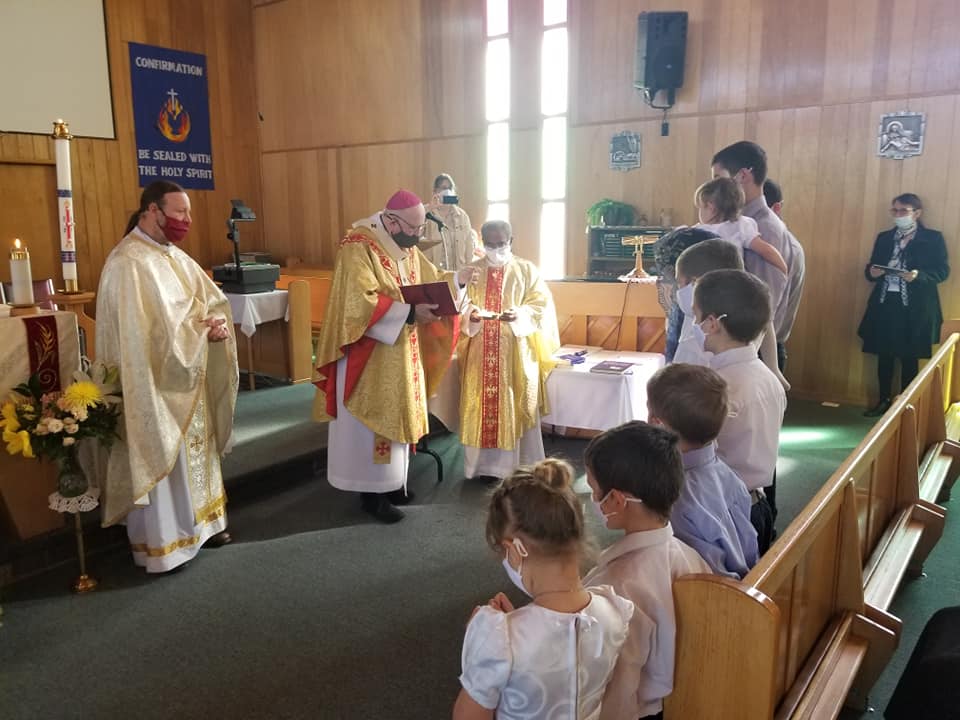 One family’s 20 year journey to the Catholic Church

Since Randy Steinke was set afire with the Holy Spirit 20 years ago, he has lived a life of street preaching, handing out Bibles, joining congregations and unrelentingly searching for the truth.

On April 5, 2021, at the moment Randy, his wife Allison, and their 10 children were received into the Catholic Church, that two-decade journey came to an end.

“When I received the Eucharist, it was like a tremendous weight was lifted off of me,” Randy said. “I still haven’t recovered from it, and I hope I never do.

“I can’t say my journey into the Catholic Church just began recently, because in a sense I’ve always been searching for the Church. I just didn’t always know that’s what I was searching for.”

The Steinke family celebrated their confirmations and the baptisms of all 10 of their children at St. Joseph’s Church in Spirit River. The Mass was celebrated by Archbishop Gerard Pettipas, and concelebrated by Rev. Arockiam Savarimuthu and Rev. Mark Sych.

It was the first time Savarimuthu had seen an entire family baptized at once. The experience left a deeply spiritual effect on the pastor.

“Seeing that is something that has very much strengthened my own faith,” he said. “They came to the Church because they desired the right faith, not a personally-interpreted faith. They wanted the Church that holds the original faith as given by Jesus.”

Randy was raised by a devout Christian father, and he recalls praying with his dad when he was a boy. But it was not until 2001, when Randy had a radical conversion experience while praying, that his life became fully devoted to Christ.

The next year, while handing out Bibles on the street, Randy met his wife Allison and the pair soon fell in love. In the following years, they became a part of many faith communities throughout western Canada. They most recently spent nearly four years as part of the Mennonite community in Fourth Creek.

“Every church we attended it was like, ‘Okay, this is the church we can most agree with at the moment’, and that’s where we would go,” Allison recalled. “But after we joined the Catholic Church, every time I think about it it’s like this warm peace has come over me. Like I know this is the end of the road.

“We don’t have to search anymore.”

When asked what ultimately convinced him of Catholicism, Randy says it’s something he’d have to write a book to explain. G.K. Chesterton, who was also a convert to the Catholic faith, once said that there are ten thousand reasons to become Catholic, but they all boil down to one reason – because Catholicism is the truth.

In his self-described “radical belief”, Randy always felt he could never be a part of a church that compromised on the scriptures. He read the Bible front to back many times over, and he often butted heads with some churches due to his firm belief in the sanctity of marriage. While he had many anti-Catholic biases through his involvement with Protestant denominations, he began to rethink his position when he discovered that the Catholic Church was strong and uncompromising in its teachings on marriage and divorce.

“I would die an island unto myself before I violated the principle of marriage,” said Randy. “After a friend of mine told me the Catholic teaching on marriage, I came to love the Church’s position. It’s clear and it has way more depth than I could ever conjure up. But initially my thinking was, well, just because the Catholic Church got this issue right doesn’t mean they’ve gotten everything right.”

From there, Randy began to read more and more books on the history of Christianity and Catholicism. In many ways, the “Road to Damascus” moment for Randy was coming to terms with the Eucharist and its central, unifying role in Catholic worship.

“The Eucharist was the main triggering point, because if this thing is true – it completely changes your concept of the church,” he said. “Once you begin to be convinced of the Eucharist, it haunts you. You develop this strange hunger for the Eucharist. It becomes something you desperately need spiritually.”

The decision to become Catholic has certainly come with its crosses, alongside its graces. Some family friends have vocally expressed anger at the Steinke’s decision to join the Church, and others have given them the cold shoulder.

But there were also those who have not let the decision end their friendships. In fact, recently the Steinke’s family vehicle had broken down, and some of the Mennonite families in their community pitched in to purchase them a new van.

“There’s a handful of guys that have not taken it well,” Randy said. “They feel that we’ve been led astray and they’ve made some comments that have been very negative. So it’s been a dark, isolating time. Satan was definitely attacking us leading up to this.

“But there were also some who heard that we felt ostracized by the community and they didn’t want us to feel that way. They’re lovely people and our hearts bleed for them.”

It’s been a long road for the Steinke family, and now that they’ve returned home to the Church they have a whole new adventure ahead of them. Their eldest son Josiah has been borrowing many of Randy’s books, and has come to appreciate the Church much like his father.

“I’m a man who desperately wants to save the souls of his children, and I once felt I may have to start my own church just to do that,” said Randy. “Often I was accused of being un-submissive, but it was only because if I saw there was something that wasn’t true, I wanted to change it.

“But now I can submit in sublime humility and peace. I’ve found I’ve always wanted.”