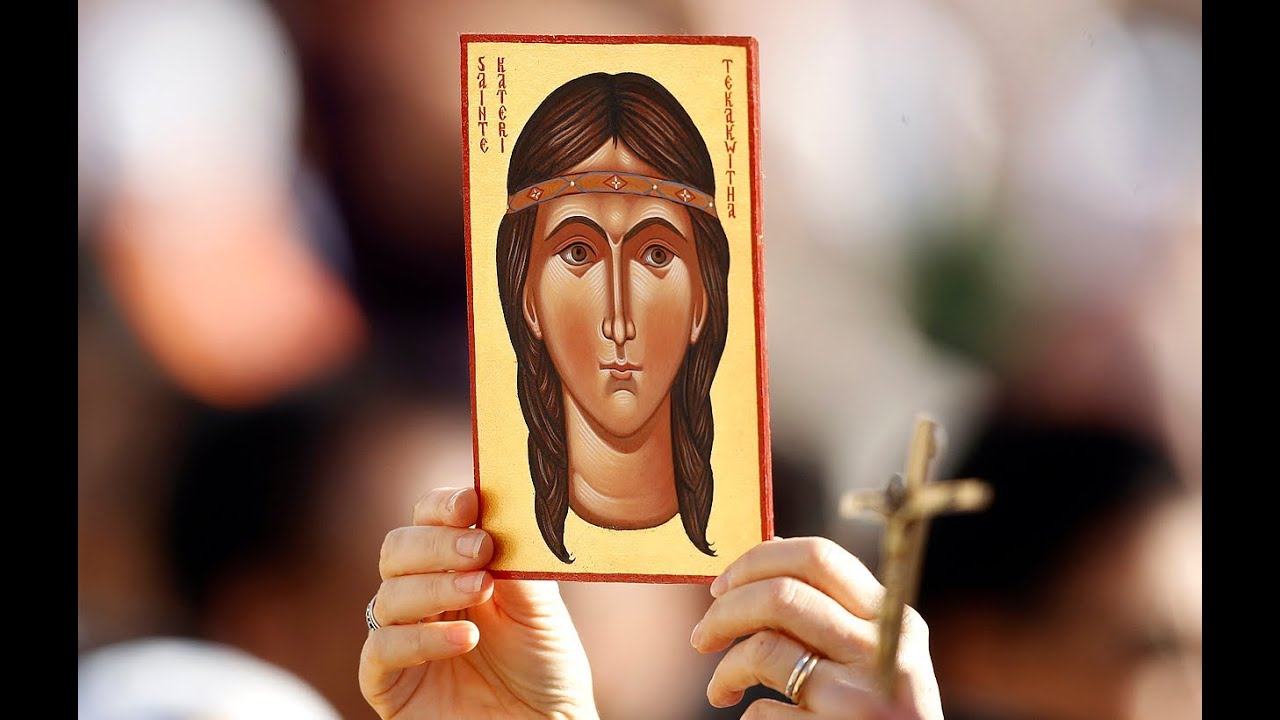 Sister Mary Jeanne Davidson can still recall the canonization of St. Kateri Tekakwitha like it was yesterday.

In those brief moments on October 21, 2012, as Pope Benedict XVI entered St. Peter’s Square and an organ resounded over the tens of thousands of people there, the School Sister of Notre Dame was touched profoundly.

“Wherever this organ was I never saw, but it started playing ‘Veni Sancte Spiritus’ and I could feel it vibrating in my ribcage,” Sister Mary Jeanne recalled, in an interview before St. Kateri’s April 17 feast day.

“We all just felt fully alive and excited. I thought I was in an ocean with the saints in heaven, with all the Indigenous people on earth and the suffering Church – we were all one at that moment.”

As Canada’s first Indigenous saint, Kateri Tekakwitha’s life has touched many Catholics. Her canonization was a particularly moving experience for Billy Thomas of the Woodland Cree community in Cadotte Lake. Years before the canonization, Thomas had visited her grave in Kahnawake, Quebec.

“It’s like a dream to talk about it. People don’t believe I was there,” Thomas said. “It was certainly a proud moment seeing her canonized. She means a lot to native people. It struck my heart when I visited her grave, so when I heard about her canonization I decided right away I had to go.”

The saint is also close to Sister Mary Jeanne’s heart. The School Sister of Notre Dame has worked with indigenous communities in the Archdiocese of Grouard-McLennan since 2002, mainly in the areas of Cadotte Lake, Little Buffalo, and Duncan First Nations.

Sister Mary Jeanne believes devotion to St. Kateri can particularly inspire Indigenous people because of the many trials Kateri had to endure to keep her Catholic faith.

St. Kateri first heard the Gospel through Jesuit missionaries in her village. In 1669, when she was 13, Kateri helped these priests treat Mohawks and Mohicans wounded in battle. It further convinced her of the holiness of their faith. Kateri then spent her days wandering through the woods and praying to Jesus. She would make crosses out of sticks and branches around her – something people devoted to Kateri still do today. Her family, however, did not approve of her new found faith and arranged to have her married. She resisted, having pledged her life to Christ, and eventually fled her village to live at the Jesuit mission of Kahnawake, south of Montreal, where she remained for the rest of her short life.

“It’d be wonderful to share her story more, to awaken devotion to St. Kateri in our communities,” said Sister Mary Jeanne. “I pray to her all the time, and we have many reasons to pray to her today.”

While she continually prays for Kateri’s intercession, actually going to her canonization was never the sister’s intention.

It was in June of 2012, from within the Woodland Cree community’s small log church named after the Sacred Heart of Jesus, that Sister Mary Jeanne announced to the people that a young Indigenous woman who died in Canada was going to be canonized a saint.

As she was about to hand out prayer cards of the soon-to-be-saint to parishioners, telling them to pour out all their hopes and prayers to Kateri, Billy Thomas piped up from the back of the church – “We should make a pilgrimage! And sister, you should come too!”

By the time that Mass was over, there was already five people in the parish determined to make a pilgrimage to Rome and be there for the canonization. Seven people in total went.

“They were so earnest to make this a pilgrimage, right from the get go,” Mary Jeanne recalled. “There were many obstacles along the way, but we prayed. We had faith.”

Those obstacles came early on in the pilgrimage. Due to some forgotten passports, the group initially were split up at the Edmonton airport. But, providentially, they found each other two days later at the generalate for the School Sisters of Notre Dame in Rome. The group provided music for the sisters’ Masses each morning.

On the day of the canonization they took a taxi to St. Peter’s Square at 4 a.m. Although it was not scheduled to begin until 10 a.m., there were already lines of people crowding into the Square. Their taxi driver managed to take them near an opening gate and the group got front row seats to the canonization. As the hours went by, as many as 50,000 gathered there.

“A whole bunch of people from Canada were there, Indigenous people from all around the world,” said Thomas. “Somehow in that huge crowd we ran into our Archbishop Pettipas there, and then all of a sudden someone shouted my name ‘Billy! Billy!’ and a friend of mine from Manitoba was there too.”

“We made a circle there and prayed in thanksgiving and for the Church. It was just an incredible experience,” Mary Jeanne added. “In all things that happened we saw the hand of God.”

They took with them sealed letters of prayer intentions from the Woodland Cree community. The group bonded on one specific prayer intention – that St. Kateri would help them in increasing faith and a love for the Eucharist in their community.

Sister Mary Jeanne believes that St. Kateri is still answering this prayer today. Recently, due to COVID-19 restrictions, Sacred Heart Church’s pastor Rev. Cyril Joseph placed a sign in the local store in Cadotte Lake, asking parents who would like to have their children baptized to provide their contact information. Then, those baptisms would be arranged one by one to comply with health restrictions.

After putting up the poster, Sister Mary Jeanne spoke “St. Kateri, please take care of this list.” Over the next two months, 17 families signed up to have their children baptized. It was a much larger number than they expected.

“So there is a quietly growing faith. God is working all the time and He is blessing our archdiocese,” said Sister Mary Jeanne. “We just have to keep listening to the Spirit, and find how the Spirit awakens faith in the people.”